The Value of Virtual and Augmented Reality Content for Brands

Virtual and augmented reality is a hot topic. Not only do the experiences drive engagement, and provide unrivalled one-to-one time between brands and consumers (far exceeding any engagement offered by television or radio adverts, purely because they last longer and involve active participation) virtual reality environments are becoming more accessible to consumers, as the technology that supports them becomes more affordable for brands.

Great virtual experiences make you forget the real world for a small snapshot of time and propels you into a different one, far more so more than reading a book, because nothing is left to the imagination. You see and feel the experience and if we want to get all buzzwordy – it’s multi-sensory. Essentially, it’s content that puts the user in the story. Because it can be so captivating and all encompassing, dwell time is longer because the user wants to be there and feels like they are. A brand can’t force a user to engage, but immersive content makes them want to.

We asked Paul Shuter, Head of Business Development at The Globe, about their decision to invest in an augmented reality app called The Globe 360. 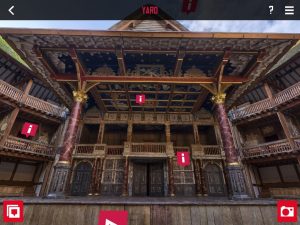 We have 100,000 student visitors a year, going on stage with an actor and learning about a play. Because of that, the app was born. What we didn’t realise was that it wouldn’t just work for school groups learning, but for other people interested in the Globe too.

“The app helps teachers and higher education students get an idea of staging, what it’s truly like on those benches. And, students who come to watch the plays have a greater understanding of what to expect.

“We were concerned that because the digital tour was so good, we’d lose physical visitors to The Globe. But that hasn’t happened . Our guides report that visitors have had the app, and interested in comparing their virtual experience to the actual experience.

“Shakespeare was a virtual reality man. he took his audience into different places mentally. The theatres at the time time helped to focus on the words and the action. He was doing as much as possible in late 16th and early 17th Century with virtual reality, from what we know about how popular theatre was at the time, people were fascinated by this technology it’s thought that a third of the population of London went to the theatre once a month. This was the virtual reality of the day, and this was Shakespeare at the front of it. If he was alive when cinema was around at the time, he wouldn’t just have been interested; he’s have been in Hollywood. If he’d been alive when tv drama was developing, he’ d have been at the forefront of that too and he’d have experimented with these virtual technologies.

“We’re interested in marrying up online and offline experiences, because theatre should be accessible to anyone from Stornoway to Orkney, and technology and you’re the app allows that. We’re going a little way in that direction by using live broadcasts. That goes so far, but that’s just cinema and it’s not the same as a live performance with real flesh and bloody. As virtual reality develops, that experience will change. If I watch a play at the globe, I decide where I want my attention to be, if I’m looking at the person speaking or to off movement off stage. or if I’m looking at the effect on the audience, as the light from the stage illuminates them. The point when I could wear a VR headset and direct my gaze and direct my gaze where I wanted to during a recorded performance is the next safe of this technology for theatre.

“Just about any play lends itself to that VR experience. Shakespeare creates a virtual world, populated by strong characters and situations. Storytellers have been playing with that for years. Take Macbeth for example, the three witches. What do they do off stage? What a thing to play around with! Apparently they’re influencing the action, but what are they doing otherwise? What about when the English army are coming to overthrow? There are so many situations Shakespeare created, that other story tellers can fulfill. Plays are linear by their very nature and the technology of the adventure game, that allows someone to pitch their own route through that world, almost any of Shakespeare’s worlds could be used like. But, we don’t believe that the virtual world will replace the physical or visceral. That experience belongs in the architecture it was written for, theatre is one of the most immersive experiences anyone can have.”

If you’d like to discuss developing augmented or virtual content for your brand, email Sharon Flaherty for more information.

Hi, I’m Chris, Content Editor at BrandContent. I work on content strategy, planning and creation. I have nearly 15 years’ experience as a journalist and editor. I bring a newsroom mindset – along with a heavy dose of pedantry – honed from writing for the likes of the FT and Sunday Times. Outside of work? Pizza and my two small children are the first two things that come to mind.